…or more particularly has been unwell (unlike Jeffrey Bernard, who was always unwell). Now 15+ years old, and still standing his ground when faced by whippets, the boss is still foolish enough to get into a scrap with the neighbourhood unneutered toms. In the New Year he developed a nasty abscess on his head. We took him to the vet, who decreed that in addition to the foul smelling wound and infection, he was seriously dehydrated, had lost a lot of weight and was proper poorly. There followed a long period with blood tests, being kept on a drip, antibiotics, a second mortgage, special diets – you know the drill. Basically, with chronic and occasionally acute pancreatitis and chronic kidney disease he was reaching the end of his nine lives.

It rather looked as though Biggles wasn’t going to go boating again: twice we took him to the vet, not expecting to bring him back home, but somehow he pulled through, perked up, started eating us out of house and home, put some weight back on and generally seemed to be near to his normal self. Much to his pleasure, and the astonishment of the vet, even though he seems to have developed an addiction to the pussy equivalent of Complan. And with the next-door neighbour’s cat still putting sir’s nose out of joint, he seemed happier when on the boat, so, against all the odds, it looked as though some more boating adventures in 2017 were on the menu.

Hence it was back to cruise planning mode after all. With an old friend passing away unexpectedly, involving us in some tracking people down and sorting out stuff exercises, we were a bit busier than we were expecting to be, but did manage to squeeze in a visit to the nearby Savill Garden one sunny afternoon, one of the deputy gardener’s favourite places.

So here are some pictures. Nothing to do with Biggles or Boating, but you can’t have it all!

The tulip border was magnificent, and the big lilies were gearing up for the season.

The rhododendrons and azaleas are always lovely here, and most of the magnolias were in their prime… 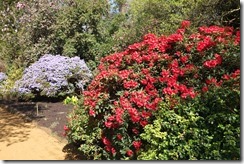 … as was the head gardener and her chums. 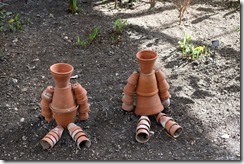 We thought there’d been a snowstorm here, but it was just more magnolias.

Really  must get down to getting ready to take Biggles boating again.