Man plans, <insert your deity here> laughs… as does CaRT!

Setting off at crack of coffee time – for once in warm sunshine, but still with a strong and gusty crosswinds – we were expecting to get tucked up in Cropredy Marina by late morning. Just half a mile along the canal stands Bridge 154. Heading in our direction, it sits on a slight and narrow right-hand bend, with a line of long-term moorers just the other side with little room to manoeuvre; as we came closer we saw another boat approaching the other side. Going into reverse caused the nose to swing to the left a bit, and the gusty wind blowing from right to left didn’t help.

As a result, the front of the boat collided with the inside of the bridge. As collisions go it would have been irritating but not remarkable. If a score of 10 represents one of Timothy West’s “boating is a contact sport” collisions with the canal infrastructure or other boats, this would have scored about 3. However, there was an awful crunching sound, as this particular contact dislodged several hundredweight of loose concrete rendering and rebar, which crashed down on the front of the boat.

With Song & Dance firmly wedged, and no way of lifting the debris, it took six of us, several ropes, a lot of engine power and considerable effort to extract the boat and examine the situation. There was a huge slab of concrete still hanging from the bridge. Blowing in the breeze, there was no way past, and it looked to be in danger of dropping into the canal, which wouldn’t have helped.

Song & Dance could have come off worse: at one point it was listing so much under the weight that we feared it might not stay afloat, but apart from some spillage from a vase of flowers, the cabin survived pretty much without problems. However, a load of concrete debris had crashed through the cratch cover, into the well deck area. We’re just very grateful that no one or no cat was sitting up there watching the world go by. 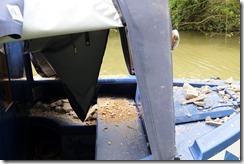 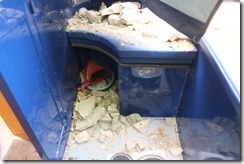 The cratch cover is a write-off, the radio aerial has been ripped off, and as for all the paintwork at the front of the boat…

We called the CaRT emergency line, and within an hour our two friends from Northbrook Lock turned up, stared for a while, scratched their heads, then started making lots of phone calls…

What’s particularly irritating, (apart from no-doubt endless hassles with insurance companies and the like to come: they’re not as organised as the car people), several of the nearby long-term moorers wandered past saying that they had been reporting the dodgy state of the rendering to passing CaRT staff for over a year! The boat following us was manned by someone who had been a professional builder in an earlier life, and he said it was quite clear from a cursory glance that the rendering had been widely and substantially blown for a long time. Another boater said he had passed under on Saturday, and noticed it was starting seriously to come away, but sadly hadn’t reported it’s parlous state to CaRT.

Our two CaRT people announced that they would have to get in their contractors from Coventry or Leicester or wherever, It being by now Sunday lunchtime, that might well not happen until Monday (or given the bank holiday) Tuesday. In the meantime the canal was shut, and they went off to fetch a work boat moored at Banbury. When they arrived back with the workboat late that afternoon, they confirmed that the contractors would be coming to sort it out on Monday morning.

Meanwhile, we’d been attempting to clear up a bit: here’s what we fished out from the well deck that had fallen through the wrecked cratch cover, Could have given someone a severe headache!

By now there was a serious queue of traffic in both directions, many coming to look and see; CaRT had phoned several hire boat companies to warn them.

Anyway, the contractors arrived early Monday morning, a new CaRT chap came out to supervise,, and with the aid of the  work boat, a large sledgehammer and some bolt-cutters, they managed to clear the bridg;, a CaRT surveyor/safety engineer was summoned, and on his arrival and subsequent inspection he announced he was happy and re-opened the canal.

We were clearly at the front of the queue heading North, but word spread like wildfire, and everyone heading in both directions cast off pretty much at the same time. What with the single file necessitated by all the long term moorers, a water point and Cropredy lock, and everyone stupidly blocking the canal because there was nowhere to pass, it was absolute bedlam. We limped into the marina at lunchtime, just over a day late.

Even more irritating was the fact that the CaRT supervisor who turned up denied that they had any knowledge of the bridge’s perilous state: no one had reported it at any time, and their lengthsman who walks the canal inspecting the infrastructure every month hadn’t spotted or flagged up any problems. Let’s just say that clearly there are some serious communication and/or competency problems in CaRT – we can feel a stiff letter coming on, and maybe a new ballad.