Waking to a lovely sunny and still morning, we noticed we were being watched. If you look carefully by the largest hay roll (click on the picture) you can see by whom.

We decided that The Boat Inn at Cheddleton had looked after the car long enough: it was time for The Holly Bush to take over the chore. If nothing else, the latter’s car park is huge. So we walked back along the canal feeling warm and virtuous enjoying the exercise. 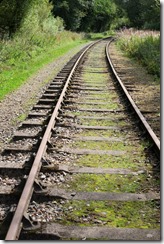 The canal, towpath and river all run side by side with the old railway; on this section, we were surprised that the track was still in place. Maybe the Churnet Valley Railway people are hoping to extend their network, and have left things alone. Given the closeness of the parallel towpath, busy with dog walkers, it’s surprisingly not overgrown. 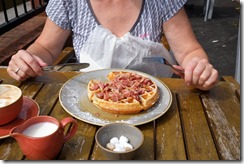 Our virtuous feeling was doing well until we passed under this odd building just before Cheddleton Lock, and found that – with a deft inconsistency in apostrophe usage – Castro’s Mexican Restaurant during the daytime transmogrifies into Oceans Coffee and Waffle House. Warm sun, outdoor table by the lock, massive bacon & maple syrup waffles and good coffee – a somewhat memorable second breakfast! Or maybe first lunch. Virtuous feelings somewhat diminished.

Staggering on, we found this little chap sitting on the path looking perplexed. After a few minutes, he flew back into the hedge,so all was probably well.

Just near The Boat Inn, Fran found her perfect house: an old Victorian end of terrace, with a nice large garden, and a mooring at the end. The only snag was that it was disturbingly close to a serious Triffid outbreak: this one even seems to have flowered, which we’d not seen before.

Disturbingly close to the excellent Boat Inn, too, and we thought we’d better say thank you by partaking of first or second lunch (depending on waffles status) before heading back to the boat by automobile.