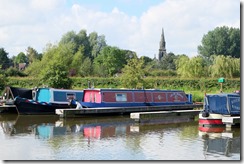 We rather liked Aston Marina, as marinas go. Nice open layout, set in pleasant countryside, reasonable walking distance to Stone, and a rather good if a bit pricey restaurant on site. Good job we don’t moor there normally. 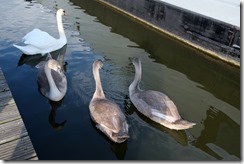 The welcoming committee took no time at all in saying hello, closely followed by demanding food with menaces.

The local security guard made sure nothing untoward happened.

With the laundry maid keeping the washing machine going flat out, on Friday morning the chauffeur commandeered a taxi back to The Holly Bush near Leek, to pick up the car and relocate it to Aston. It might prove useful to go to Bromyard Festival next weekend, but dragging the car around with the boat is becoming a real drag. Not for much longer, we hope.

Saturday morning, we headed off in pleasant weather down the well-trodden path to Great Haywood.

Just outside the marina, this bunch of geese had taken over the cow’s watering hole.

And – lucky us – we found a spot right in the middle of the Great Haywood Visitor Moorings, and headed off to The Clifford Arms, where food was plentiful and surprisingly cheap for us southerners.