Over the years, we’d heard troublesome stories about boating through the middle of Leicester: security, vandalism etc. etc., and it’s a concern in parts of several city centres. But we’d heard things had improved somewhat, and that there were very good – if limited in number – secure moorings at Castle Gardens: right in the middle of town. And so it proved.

The journey in from the North was not overly inspiring; we shared the locks with another boat, and both learnt something new. If you’re ascending a lock, with the water coming in, you usually get pushed back towards the rear gate. But some develop – part way through filling – a quite fierce undertow that drags the boat forward, and can result in you hitting the top cill or gates with quite extreme prejudice.

Waiting below the bottom gates while a lock drains is normally drama free, sometimes there’s a significant flow that pushes you back a bit. But on the lock just below the Space Centre – and neither crew had experienced this phenomenon before – there was a serious undertow below the lock, dragging Song & Dance into a rather closer acquaintance with the closed bottom gates than desirable. Dropping all the paddles, we extricated the boat and retired to a safer distance to try again. Not a good start!

As it turned out, the moorings at Castle Gardens were most amenable, and there was plenty of space when we arrived. The floating pontoons protect you from the Soar flooding, and there’s a high fence with a locked gate that provides entrance into the gardens. The gardens themselves are quite large, pleasant to wander around, and with a convenient bridge across the canal, although situated between the two halves of the De-Montford University campus there’s lots of people. And there’s a 24 hour Tesco within 5 minutes walk. Even better, the various gates to the garden are padlocked at 17:30(ish), providing even better peace and security. But you’re not stuck for the evening – one of them has small inset gate (duck or grouse) that is unlocked with a key that every boat carries but vandals, by and large, don’t. Yes, it’s a bit close to the main river and canal crossing road bridge, and not far from a large A&E, so there’s a bit of noise from ambulances in a hurry, but no worse than any other city centre.

Immediately opposite the mooring is an impressive building that used to be a major sock factory; the bridge just to the left is quite a meeting place, and underneath clearly a favourite spot for feeding the swans, geese, pigeons and ducks. The place suited us just fine, so after lunch on the boat we determined to explore. 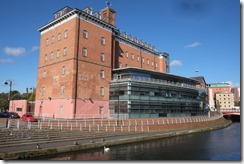