They’d been forecasting warm and sunny – hot even – for several days, so awaking to glorious sunshine we wondered if they’d got it right for once, especially as  the lovely weather was always going to be “the day after tomorrow”.  (The Red Queen has nothing on these Met Office chappies). Anyway, Wednesday morning was fine, dry and not terribly windy – but still chilly. With a deadline for getting to Oxford, after a very quick whizz round the shops we were off.

There was still plenty of water around, as witness the excess flowing over the top gate at Banbury Lock. I guess there’s no bywash / culvert here. The Thames was still pretty well solidly on red-boards too when we checked first thing.

Once clear(ish) of Banbury heading South, there is a nice stretch of open green fields on the Starboard side falling away down from the Adderbury road. Favoured by dogwalkers, with a couple of lift bridges to decorate the view, a few years ago Biggles used this as his swimming pool. Anyway, this year a huge area had been surrounded by temporary six-foot high fencing. “Reckon this will be a huge housing estate soon” we remarked to each other…

Stopping for a brief lunch near Twyford Wharf, we pressed on…

Fortunately, we were able to get under Nell’s Bridge – it’s at the exit of Nell’s Bridge Lock where the canal locks down onto the River Cherwell for a bit, and if there’s been a lot of rain the headroom can be somewhat limited. It had been impassable for a day a few days ago, so that was one hurdle out of the way! 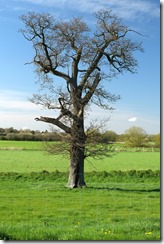 The first time we came down this way, we moored by this tree, which had a resident owl which we spent quite a time watching. We’ve always called this spot “The Owl Tree” but may not be able to much longer – it seems to be dying fast, and have never seen an owl here again!

Through Aynho, then Somerton Deep Lock – always an experience – we ended up tying up for the night just outside Upper Heyford, near a bridge called “Single Bridge No. 202”. (The next one’s called Double Bridge No. 203).

Still sunny, but cold, we’d covered 11.5 miles 7 locks and a lift bridge or two. A long day for us, and another one beckoned!