An early start on Saturday morning had our friend and morris dancer Sue arriving from the station weighed down by TWO morris outfits. Some people don’t know when enough is enough. Still, at least it was sunny, and on the way to being seriously hot for the time of year. Jam today! The Red Queen will be turning in her grave. Rather different to dancing in the snow, like a couple of years ago.

First up was the Ashmolean Museum. You might think that Jackstraws had forgotten their hankies and their sticks, but this dance was actually sponsored by government cutbacks. It also cunningly disguises the fact that Shirley had forgotten to bring some kit for country member and sister Chris. Good job she had a Jackstraws T-shirt. 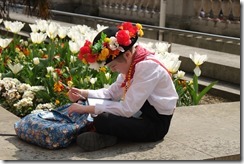 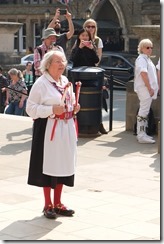 Basingclog Morris seem to appeal to both the young and the – errm – slightly more mature dancers. And no morris display would be complete without the ever-young octogenarian Bob Prince lurking in the background. 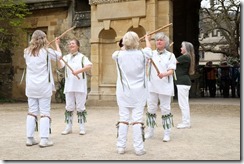 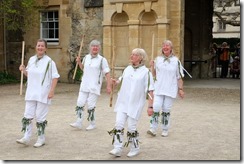 After lunch, it was the first time Jackstraws had danced in the Botanical Gardens, which was a nice spot apart from the rather unsuitable loose gravel dancing surface. And when numbers are short, dances for four-up are definitely a good move. 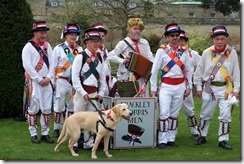 As well as dancers and musicians, Brackley Morris Men seem to have a Morris Dog too. Seen horses, cows and fools, but not seen a dog before: wonder if they come under the same rules as other assistance dogs. Perhaps they can warn of anyone likely to suffer ill effects or emotional outbursts from an outbreak of unnecessary Morris Dancing, 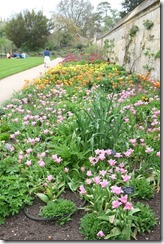 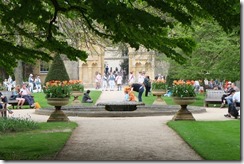 After all that, a late afternoon coffee watching the stunts of the punts on the river, and a wander round the gardens, we adjourned to the boat. With the girls spruced up, we were all too tired from all that sun and exercise for a ceilidh, and retired to the Lebanese Restaurant across the bridge in Jericho for the third year running, for some decent food and some nice wine courtesy of the late Serge Hochar.

Sunday was again nice and warm. Sue whizzed off in her different kit, followed by us… not quite sure where the day went: strolling around Oxford tripping over Morris and other dancers of all shapes sizes and varieties. To avoid causing offence, there are no photos of the Belly Dancers, even if this lot seem rather less bellied than last year’s. And I was frankly appalled to discover that the Outside Capering Crew’s Bacca Pipes dances used fake pipes made of copper tubing painted to look like clay. No wonder they never seem to break one.

Having travelled down through Oxfordshire, where the old Ridge and Furrow mediaeval agricultural system is often still highly visible at the edge of the canal, it only seemed appropriate to finish the weekend by going to see  the excellent Furrow Collective, who weren’t as a loud as False Lights, despite Alasdair Roberts’ electric guitar. We were also very taken by the support act, a Welsh trio called Elfen (with the emphasis on Fen).

And after a gloriously warm and sunny weekend, we noticed a decided nip in the air as we walked home at about 22:30. Milly M and Bones were still tied up at the end of the cut  at Hythe Bridge, having overstayed the 48 hours, just like Song and Dancei  and Mallard (a fellow morris dancer) a few hundred yards down. Seems par for the course at Oxford Folk Weekend.