Wednesday morning saw us pulling up as near to Market Bosworth as we could, and tackling the mountainous ascent to the Co-Op, Greengrocer, Butcher’s shop and cafe. Not much seemed to have changed in the last decade, except the aforementioned peculiar cottage had done something very odd with the tree in the back garden, and the chippie had acquired a sense of humour (not).

All over the Coventry Canal and elsewhere, CaRT have been putting pegged coir rolls where the bank is suspect, as it allows Ratty (who was a Water Vole)  to get in and out with ease. And signs telling you all about it. In fact, despite any wind or willows, we are pretty sure we saw one swimming across the canal – rat sized but no obvious tale, so we got pretty excited. Here, they haven’t bothered with coir rolls – they just leave a hole very tenth post. Fran also got excited when she saw someone had named their boat after her, but was rather less impressed by the pram hood. 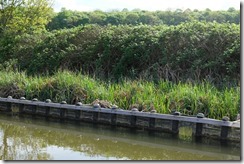 About the nearest accessible place of even a half-decent size is Stoke Golding, a delightful village which we’d never visited before, and from which comes the energetic Stoke Golding Country Dance and an erstwhile Mother-in-Law, who collected it.

The moorings below the village were splendid, with just a short walk across the fields to an excellent pub The White Swan, at which dinner was partaken.

And so, as we neared the end of our detour (the much by-passed Ashby Canal runs pretty much North – the direction we’re heading, but then you have to retrace all your steps), we decided it really was a lovely canal to wander gently along – we’ll be back, and stay awhile. Perhaps we’ll even visit Bosworth Field.