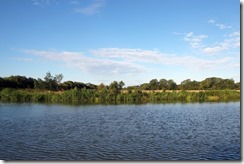 Some of the best cruising conditions in the summer are often found first thing in the morning: crisp and cool clear air, no clouds formed yet, hardly anyone around… even breakfast cereals and tea on the hoof (so to speak) taste splendid. We’re not very good at getting going like that: it’s a rare event. And the downside is that the other people who didn’t get going early are having cooked breakfasts, and the smell of frying bacon wafting across the water is pure torture: it should be banned under the Geneva  convention.

Another cruel and unusual punishment came to light later that day: new enormous pilings being put in on the Rushey Lock weir. We could hear the pile-driver’s “bang… bang…” from a mile away, getting louder and louder. What on earth the people staying in the lock-keeper’s cottage made of it, goodness only knows. You needed ear-defenders to work the lock. Another case for the Geneva Convention?

Beats us how the visiting lock keeper puts up with it. Mind you, it is nice having someone there to do all the hard work around locks bigger than we’re used to, even if the gates and paddle gear are properly maintained and easy to move, unlike a lot on the canals.

On the promise that the pile-driver torture would cease at tea-time, we moored up just around the corner, with another lovely view, and a distinct incentive to get going again early in the morning!