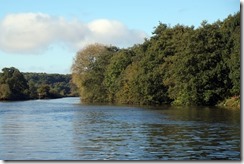 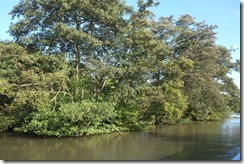 Whatever happened to Autumn? Leaving Abingdon for Oxford on a lovely, warm, sunny and calm day, there seemed little evidence of any leaves turning, although some trees looked a bit down in the mouth. Over a month ago the horse chestnuts looked as though they were turning, but haven’t done much except drop conkers, and we haven’t seen a swallow or martin for quite some time. There are a few leaves in the water, but hardly any really. Everything’s very confused.

You often meet interesting people on the water. A good example: mooring up for lunch just above Iffley Lock on the outskirts of Oxford, a young woman – late 20s, early 30s we’d guess – who was sitting the bench scribbling in a large notebook looked up and offered to take a rope. The kettle was going on so coffee was offered and accepted and we all got chatting.

Turned out she was enjoying the good weather sitting on the bank “writing a novel”, that having returned from teaching in New Zealand and having failed to make much progress writing and working in Manchester she’d recently cycled down the canal system and was now living in Oxford just writing. A novel about a woman with mental health problems it would seem. Amiable, cheerful, chatty, interesting… we never found out whether she was being sponsored in some way or starving in a garret somewhere. Her name was Kate, don’t know what the novel was called… wonder if she’ll ever get published. Guess we’ll probably never know.

Meanwhile, Iffley Lock not only has an unusual by-pass for canoes and rowing skiffs, but the Environment Agency are obviously struggling to recruit decent volunteer lock keepers these days. 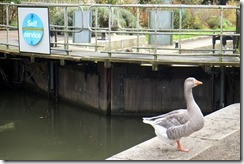