Just noticed that some blog postings from the launch date have either gone AWOL, or were never posted in the first place: just for completeness they’ll get (re?)posted with the original date, just in case anyone wonders what on earth is going on. (A permanent state of mind on Song & Dance these days, we fear…)

Song & Dance is pretty much an identical copy of Toulouse, a boat made about three or four years ago for Mr & Mrs Walker. We saw it at Piper’s annual gathering at Henley, where it turned out they were taking it in part-ex for a shiny new Dutch Barge (called Lautrec – quelle surprise).  We liked Toulouse a lot but couldn’t do anything then – ah well. But a few months later Pipers offered to make us a copy at a mutually agreeable price, and there rest is history. We last saw her moored in Thames & Kennet Marina at Reading in early 2014.

And then we head up to Cropredy in March to move Song & Dance into dry dock for a day when a long (70ft) boat the other side of the marina moved off, and who did we see hiding behind it: Toulouse. Probably been there all winter, just like us. She’d gone when we set off last week, but who should we find moored at Ayhno with a fancy clothes dryer??? 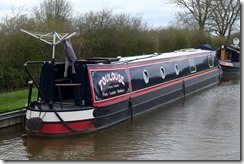 Occasional trips to Cropredy over the winter found us parked next to a car proudly displaying a Yateley Morris Men sticker. We knew Ian & Janet (who run the  bar at the estimable Guildford folk club) were having a boat built – called Tuesday Night – and were going moor it at Cropredy. Looked like they’d arrived, and sure enough they had.

Another “hail fellow” we bumped into at Cropredy was another folkie Ian, who we used to see pretty much every week in the late 70s and early 80s at South Hill Park until he moved to Midhurst or Chichester or somewhere and started a morris side. What is  it about narrowboaters and morris dancers? His boat’s called Cuckoo’s Nest but presumably to avoid prosecution under the Obscene Publications act or to avoid upsetting local sensibilities and Ken Kesey fans, the only place her name appears is in very small print on the Canal & River Trust licence.

Wandering around the marina, we also saw several other boats that looked familiar from last year, including Red Kite.