The night before, we had held a committee meeting and decided that (a) we would go on to the River Nene after visiting Sidmouth, and (b) that the Northampton Marina at Becket’s Park on the Nene was more convenient than Gayton Marina for transport arrangements when it came to fetching a car to transport all the crew back home. Even though heading down the Northampton Arm from Gayton meant 16 or 17 narrow locks to reach any kind of suitable mooring, we were going to have to do those to get to the Nene anyway, and there was plenty of time before needing to head Devon-wards.

First thing on the Wednesday morning, it was clear that – ear mites or something else – the Captain urgently needed to visit a vet. Google being our friend, we could either get a taxi to Towcester, or try and get down to Northampton (yes, all 16 locks) that day, and take it from there. Even though the weather was forecast to get seriously grotty, we opted to head downhill again, and see how we got on.

But first, we needed to visit Gayton Marina to tell them we weren’t going to leave the boat there next week, get a key for the River Nene locks (it’s an Environment Agency waterway, not a CaRT one: different keys!), get a piling clip to replace one dropped in the deepest part of the canal, and hopefully a guide to the Nene.

Turning into the Northampton Arm there seemed to be boats coming in all directions, but the marina is just a few yards down, and it’s a big one to boot.

Our cratch and rear deck covers came from Wilson Covers in Kinver, as did our reclining chairs (from Ralph, who lets his sons do the covers, and just handles the furniture side of things these days). The cratch cover had needed a minor repair from about day 3 on the Caldon Canal last year, and since the same crew member took a large lump out of Aynho Bridge in the strong winds this spring it needed rather more serious surgery or maybe even replacement. There were also some minor issues with the chairs.

As a result, we’d been meaning to take the cover to Kinver for inspection or condemnation when an opportunity presented itself, and discussions regarding the chairs had tailed off into boat-induced lethargy on our part. We’d seen a Wilsons van in the Thames & Kennet Marina in Reading back in the spring, but failed to track their chap down there, and he didn’t respond to the message we left asking him to contact us before leaving Reading. Ah well.

And then, just as we were approaching the marina’s visitor moorings, what should we see but a Wilsons van being driven alongside the canal. By Ralph Wilson, no less. And a long way from Kinver! Frantically waving him down, mooring up at the same time, and throwing our last caltrops in front to slow him down, we asked if he would mind taking a look at our cover to see if it were repairable. “Yes it is” he said, before he’d even got out of the van. So the cover was quickly removed, and bundled into the back of his van. while the chief cook bearded him about the foot stools.

The other errands at the marina quickly accomplished, the rain was starting when we reached the first of the locks, signalling a precipitous descent down into Northampton. Various people said it took about four hours to get down – not including a lunch break. The Captain took one look at the flight and the renovated-out-of-all recognition (or new) lockkeeper’s cottage, and jumped ship, and the likelihood of getting into town in time to find a vet seemed to be receding rapidly. 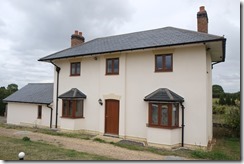 Sloshing around in the rain, a few locks down they were dredging the canal, adding fun and games and delays to the exercise, and we moored for lunch right by the M1 crossing: a glorified if huge culvert. At least they were narrow locks.

For once, things went to plan! We’d established that (if we could get moored there) there were probably suitable moorings just shy of the River Nene lock, seemingly just a ten minute walk from a veterinary surgery that could fit us in if we got there before 18:00. The rain eased off a bit, and we reached the moorings about 17:00 – seemingly quiet, virtually no dog walkers, and overlooked by some posh new waterside flats, so little likelihood of the area being a vandal’s training camp. Only 5 minutes walk from an Asda, 10 from a big Morrisons and 15 from the town centre, we couldn’t understand why there was only one other boat there. He’d been there several days and confirmed it was a most amenable spot, albeit not overly scenic. 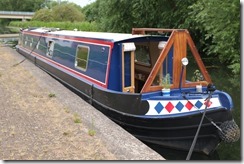 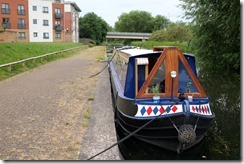 So Biggles was bundled into his carrying box for a quick walk down the road, and a nice vet lady confirmed that he did appear to have a nasty ear mite infestation, did the biz, and sent us away with some drops.

The Captain appears to prefer ear mites and nasty suppurating scratches on the forehead to ear drops… battle will commence daily at 18:00.

And Song & Dance does look rather naked without the cratch cover…

A long day: we all slept well that night.

2 thoughts on “Coverless in Northampton, and Opportune Coincidences”