Ely waterfront might have been quiet in the morning, but on return from the “free” coffee it all became chaotic, with three boats appearing out of nowhere to use the pump-out and waste disposal facilities just up from where we were moored, and wanting us to move up so they could squeeze in and so on because others had moored antisocially leaving too small gaps.

We’d more or less decided to brave the Denver Sluice to Salter’s Lode River Great Ouse tidal transit scheduled for 12:30 on Wednesday, and it was about four hours cruising from Ely to Denver, so we needed to be away from the fleshpots. Hence, after lunch and availing ourselves of what is probably the only free pump-out left on the waterways – it would be rude not to – off we set. 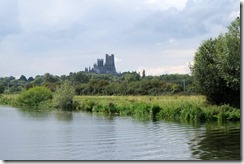 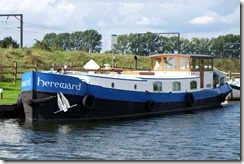 Looking back, it was quite clear why Ely Cathedral is known as The Ship of the Fens; the rather fine and new looking Piper Dutch Barge Hereward is also aptly named if she’s based around here. 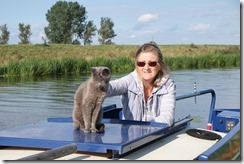 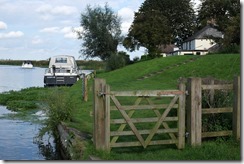 About halfway from Ely to Denver Sluice is another ship: The Ship Inn – this one with fine overnight moorings. The cruiser, incidentally, is named Scand-L-Us, which just kind of fails to hit the spot on several counts.

Being by now a pleasantly warm late afternoon, the Captain declared that the sun was firmly over the yard arm and followed us to the pub, where he agreed with the first mate that Adnam’s substitute for proper Guinness really didn’t hit the spot either, and settled for supping some of the dog’s Adam’s Ale instead. 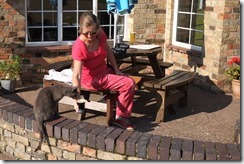 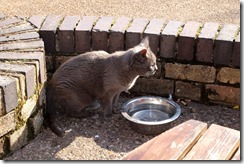 We were sharing the moorings with a chap from Northampton who was camping with canoe and pup-tent. Unemployed and seemingly unemployable for some years, he spent the summers canoeing round the country waterways on his own, and enjoying every minute.

We’d met someone doing exactly that last year on the Kennet & Avon. It could have been the same chap, but he couldn’t remember whether he’d been down there last year or the year before. Anyway, after some time putting the world to rights we returned to cook some dinner, although Biggles seemed curiously reluctant to do the same – perhaps he wanted to eat at the pub. 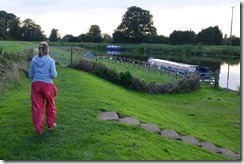 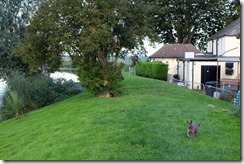