The Severn runs just below, and very close to the Gloucester & Sharpness Canal, and just a mile or two from Sharpness, at Purton, there’s the largest ship graveyard in Britain. Known as the Purton Hulks, from 1909 onwards attempts were made to prevent the Severn eroding the canal bank, by deliberately beaching redundant barges there.

Not wanting to head all the way – admittedly not far – back to Slimbridge only to find mooring a problem late in the day, we stumbled on a pleasant spot to moor up just above the hulks. The Captain was intrigued, and immediately set off to investigate. It’s really not far from Sharpness: the wind turbine in the picture looms over the docks and you can see the old lockkeeper’s cottage too, through the haze. 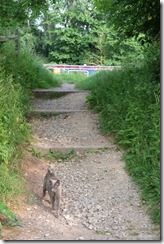 There’s supposedly over eighty barges beached along here. The earlier, wooden ones, have become rather more assimilated into the scenery and greenery, and acquired other boats on top, so there’s not so much visible evidence of them. But the concrete barges still stand proud even if I still have difficulty with the concept of building a boat out of concrete, but there you  go. 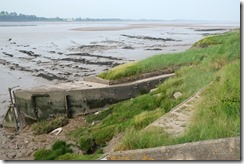 Watched over by the Forest of Dean on the other side of the river, it’s million miles from anywhere and an odd and unique spot.