Leaving the hulks behind on the Friday morning we were soon back at Slimbridge, and had a lovely day wandering around the various hides. We still felt there were parts to which we’d not done justice, so we had another wander on the Saturday. This time the FO took a camera, but even when fairly tame, getting decent photos of the critters isn’t always easy.

A pretty comprehensive guide as to what’s at Slimbridge can be found at this site, but here’s a few of our photos, in an attempt to make bird identification and nomenclature a little easier. 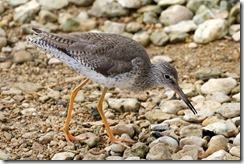 This chap (or chapess) has orange-red legs. It’s called a Redshank. 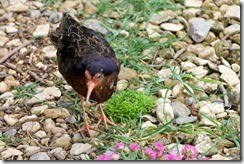 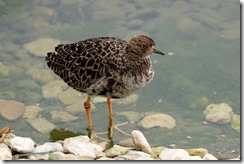 The female of this pair (the second photo) looks vaguely like a Redshank, but when the male gets excited he sprouts a large ruff of feathers around his neck… 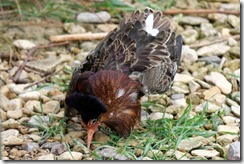 The birds are called Ruffs.

This pretty little chap has a white face and whistles cheerily and continuously as he goes about his business. It’s called a White Faced Whistling Duck. 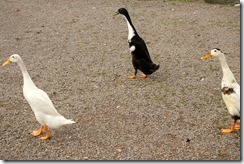 These ducks come from India, and run around upright in small gangs like they’re in the Olympics. They’re called Indian Running Ducks. 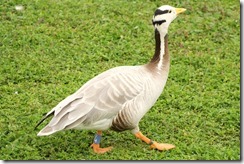 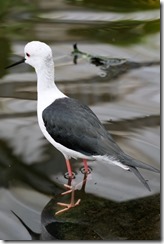 In a completely different vein, this goose has black bars on its head: it’s a Bar Headed Goose, while the tall chap with stilt like legs and black wings is called a Black Winged Stilt. 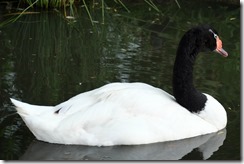 In a staggering demonstration of lack of imagination, this bird is a Black Necked Swan. 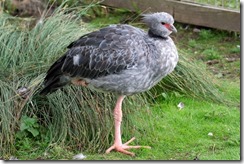 And finally, a hard one. This sizeable bird has a notable crest, and is known for screaming so loudly it can be heard 2 miles away. Apparently it’s a Crested Screamer.

So that’s all clear, then.