Finally leaving Slimbridge on Sunday morning, we made it all the way back to Gloucester Docks, via a short diversion at Saul for fuel (both diesel and human food). We moored back up on the Llanthony pontoon, in weather that looked increasingly ominous.

The plan for Monday afternoon, was to do a proper tour of the cathedral: we’d been told they were filming something on the Monday morning. 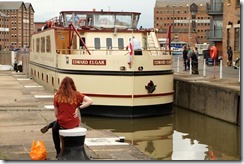 Heading towards the cathedral over the lock gates as the large holiday hotel/cruise boat departed the dock, we were slightly intrigued by the red-haired young lady with the colour coordinated carrier bag. She looked for all the world as though she was mournfully waiting for her ship to come in. But at the last minute, a crew member of the boat appeared on the starboard side of the boat, and with arms outstretched by both parties, the bag was passed up onto the boat. Clearly a last minute delivery of supplies from Sainsburys. 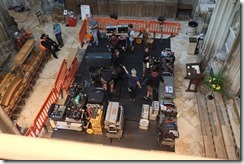 The cathedral was a little bit of a disappointment: the filming was not only going happening on Monday morning, but all day all week it seemed. The local car park was full of support vehicles, the cathedral surrounded by generator lorries, and full of film studio kit. Large parts of the cathedral were out of bounds to visitors, although a very friendly knowledgeable guide gave us a tour of the bits still open, which was most informative, and let us into some areas normally only available to paying guests, as a consolation prize.

Here’s a couple of pictures sneaked from the whispering gallery. Seemed they were making an American production of some medieval story. It seemed odd seeing knights in armour speaking with strong NY accents, although Scottish actor Kenneth Cranham was spotted in a side chapel, in a  bishop’s outfit.

The wonderful  medieval glass window (the size of a tennis court) was removed and packed away safely during WW2, with half stored in the crypt and half in the cellars of a nearby stately home. After the war, the boxes were recovered and opened, and the glass had all survived intact. Unfortunately, however, both storage sites had been damp, and all the sticky paper labels had faded, smudged or come off. So the glaziers had the largest jigsaw puzzle in the world… and had to go and buy picture postcards of the window so that they could make a start.

After the disappointment of Monday, the quartermaster spent half of Tuesday wandering around the new “Outlet” shopping area while the FO moved the boat to attend to certain plumbing necessities (and back) while the Skipper jumpp ship and went walkabout around Gloucester college. Wednesday passed in a blur, but involved  a wander round the museum of the Royal Gloucester Regiment, a visit to the railway station, and more shopping.

With all the heavy rain that had been going on everywhere, we were getting interested in whether we there was going to be trouble heading North up the Severn. Asking the Gloucester lockie on Wednesday evening whether there were any issues heading up to Tewkesbury on Thursday morning, he said that he’d just got back from a few days off, the river had risen significantly, and the Upper Lode lock at just South of Tewkesbury was talking about shutting… we’d need to talk to them first thing Thursday morning. Hmm…