So much for lazing about doing not a lot on a narrowboat: Friday proved a busy day. We’d booked the car in for an MOT at noon back near Piper Boats because we thought we’d be nearby, but the best laid plans… Meanwhile SWMBO was still suffering from coughing and some new chest pains following the Sidmouth lurgy. As the MOT centre was near a hospital with a walk in centre, and we were going right past, madam was duly dropped off to see if she could get a chest MOT as well. Fortunately, both car and human passed with flying colours: in Fran’s case it was a normal viral cough/cold and a pulled muscle probably from coughing too hard (or overdoing the windlass at locks).

Anyway, we thought the Churnet Valley Railway were running trains between Cheddleton and Froghall during the afternoon, and decided to investigate, particularly as we fancied getting ahead of the game and leaving the car at Cheddleton Station or thereabouts and getting the train back to the boat at Froghall ready to cruise back on Saturday or Sunday.

Turned out they were having a special Gin weekend, and were running trains regularly from Friday afternoon right through to late Friday night (as well as the rest of the Bank Holiday weekend). 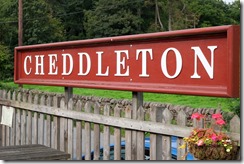 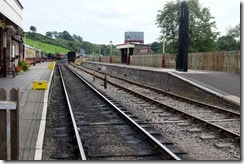 The local advertising proved a little dubious, as cider was off, dear… this year they were having separate Gin and Cider Events but someone mistakenly ordered the same posters as last year! We did catch them unloading some of the  40 or so Gins though, but were a bit early for the bar to open. 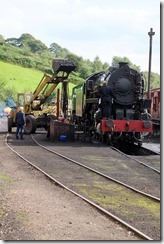 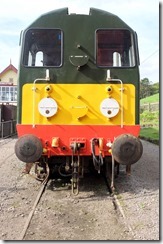 At the end of the platform, we could see them coaling up their steam engine ready for service later that weekend. Mind you it must be easier filling the tender with a JCB than a shovel! Thought this diesel had rather a cheeky smile, too. 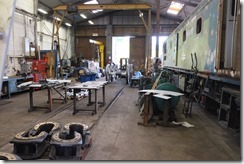 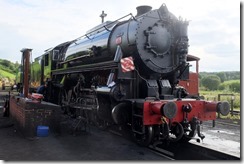 Peering into the workshop, a friendly chap offered to show us around and take us out to the yard beyond to wander about, which was much appreciated. 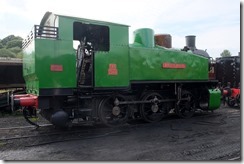 We renewed our acquaintance with Hotspur (last seen on our maiden boat trip), clearly undergoing some heavy maintenance, and made the acquaintance of George, the workshop’s resident pheasant. Just a little way down the road/canal/river/rail-track (they’re all together here) was an country estate where they raise pheasants in large numbers as shotgun targets; George had obviously decided being regularly fed by an engineering shed manager rather than a gamekeeper was probably a good career move. 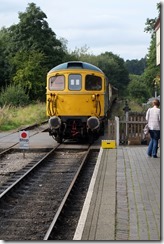 As we waited for our train “home” to Froghall, one of us became entranced by these two lovelies, who were also waiting for the train. Fortunately, it came before someone had decided to go in for puppy-knapping.

We enjoyed the journey back, and just doing it one way in the afternoon seemed a waste, so after a quick trip back to the boat to unload stuff and partake of a quick meal, we headed back to Froghall station, where the gin palace was now well and truly open. Then did the return journey to Cheddleton and back just for the hell of it. Madam was very taken with the Rhubarb & Ginger Edinburgh Gin… something for the Christmas list perhaps!

And so to bed!