After the custard tart had been disposed of, the wander around the city continued. There are plenty of impressive buildings around, and even some of the seemingly plain brick ones sometimes have surprisingly ornate decorations. And not-Fenwicks is an eye-catching edifice too. Apparently the new owners are going to convert it into several shops and restaurants and 90 apartments that seem unlikely to feature on the affordable housing lists. Fenwicks have also closed their shop in Windsor, but opened up in Bracknell. Go figure!

The chef decided we needed some fruit and veg. The market seemed somewhat awash with them, which kept her mesmerised for ages. 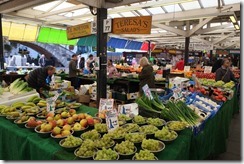 The square in front of the Town Hall has a rather fine fountain, and seemed a popular place for meeting, greeting and/or reading the paper.

We stumbled over a newly refurbished arcade joining two streets in the Lanes area, but it looked deserted as no-one seemed to have moved in. And we couldn’t avoid the famous clock tower, could we?

We were rather taken with this hat shop display; rather less so with the nearby “fancy furnishings” store whose rusty Richard III crowns seemed rather, err, rusty. 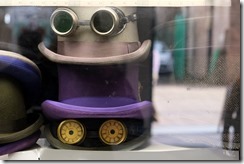 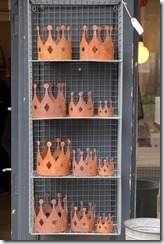 Enough of shops and stuff, we headed off to the highly recommended Jewry Wall museum, just across the road from the boat. We’d singularly failed to notice that it was closed until further notice for refurbishment. It’s on the site of the Roman Baths, of which some impressive remains still survive. The church immediately behind was supposedly interesting, but closed too.

So it was back to the boat for a cuppa, then a quick trip across the canal to Tesco to stock up on the essentials.

Still in city centre mode, we headed back into a by now rainy Friday evening to eat, and ended up in a Pho – Vietnamese Street Food restaurant – a first for us. A rapidly expanding chain, we can understand why – the food was very good. We know it was a Friday night, but relatively early; it was heaving and we were lucky to get a (shared) table. The adjacent upmarket burger, pizza and bistro establishments were relatively empty, so they must be doing something right!

Mind you, watching the kitchen sprinkle chopped peanuts or pour satay sauce over pretty much everything, we couldn’t help thinking the lady at the adjacent table with a peanut allergy was probably in the wrong establishment. We hoped her Epipen was handy and working!