It’s a long climb from Trent Junction along the River Soar and the Leicester Section of the Grand Union all the way to the bottom of Foxton Locks and Market Harborough; the Foxton Locks themselves then provide a final rocket assisted ascent onto the summit pound. But travelling up to Leicester, the climb had been undemanding and spread out. This rather changes after the centre of Leicester.

We’d been counting the lock numbers downwards, and the next lock en-route was number 41. We’d had emails from CaRT that there had been some problems with low/empty pounds around locks 37 and 38, supposedly due to idiots leaving paddles or gates open. Then came a bombshell… apparently due to “low reservoir levels despite recent heavy rains”, to preserve water and replenish the reservoirs they were closing the entire Grand Union Leicester Section from below lock 38 to above lock 30 “until further notice” (which probably means all winter). We initially misunderstood the email and thought the closure was going to start at 15:00 on Monday, which didn’t give us much time and caused a severe fluttering in the doo’cots, but a more careful reading showed that the stoppage would actually start on Wednesday afternoon.

Given the propensity for the Soar to become non-navigable pretty rapidly after heavy rain, the likelihood of a lock becoming broken etc. etc., and the alternative route home being to retrace our steps all the way back up to Trent Junction then along the Trent & Mersey to Fradley Junction and down the Coventry and North Oxford Canals – a detour of approximately three weeks – we decided the sooner we got above lock 30 the better. We also knew that our chums on Joss and Corniche weren’t planning on leaving Leicester until Sunday, and doubtless others would in a similar boat – if you’ll excuse the pun – adding to the likely difficulties with low water levels and so on. And not knowing this canal, we decided the sooner we headed off the better, planning on covering half the distance on Saturday, and finishing off the rest on Sunday.

Setting off relatively early – for us – we’d just finished filling Lock 41 by the Leicester City Football Ground, when Crystal Ball turned up below the lock, so we said we’d wait for them,in order to share Lock 40. Sharing a lock for the first time is always a little nail-biting: are they gung-ho and determined to crash around trying to beat the clock, or are they single-handing or timid and desperately slow?

Crystal Ball’’s crew were neither; we pottered along amiably together as a good team taking turn and turn about. They knew this section well, suggested that for reasons related to a nearby Young Offender’s Institute, and despite the rural appearance, this section wasn’t really a good place to plan on an overnight stay (needing a key to operate the locks was a clue!). They were planning on getting all the way to Kilby Bridge above lock 30, so, despite their SOP of not stopping for lunch (SWMBO doesn’t like lunch on the hoof, so to speak), we stayed with them. Occasionally dragging our bottom in low pounds, we duly arrived above the scheduled stoppage by mid afternoon. Whew.

6 hours on the move, just over 8 miles and 12 broad locks – nearly all set against us. A long day for us and Crystal Ball. Thankfully there were a few free moorings at the top, the sun was shining, and we gratefully tied up and went for a celebratory Guinness at the pub by the bridge. 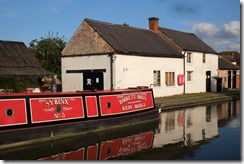 No time for photography on the way up, but Kilby Bridge Wharf is a CaRT maintenance centre and looked just fine in the sun. 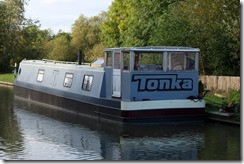 And we couldn’t help chuckling at this broad-beam boat moored opposite.

And, of course, our friends on Crystal Ball had spilt the beans: the low water levels weren’t really to do with low reservoir levels. Most of the lock gates leaked significantly and the proposed programme of stoppages to sort them out during September (during the main cruising season) had produced an avalanche of complaints causing postponement until later in October (still early). And there had been a major leak somewhere in this section for over seven years (the field near lock 37 which regularly turned into a swamp was a clue, and the farmer was getting pretty fed up). They’ll probably drain the complete canal and try and find the leak. Let’s hope it gets fixed by the spring. We wouldn’t bet on it, based on CaRT’s performance so far.