Our recollection was that we had not done any of the Grand Union Leicester Section South of  Mountsorrell or North of Foxton Locks. But cruising down from Debdale Marina the other day brought back vague recollections of a short recce up from Foxton many years ago on the way back to Market Harborough, and of the canal being rather more overgrow than now, A rummage on the laptop found this picture from late September 2006, confirming our suspicions. It’s just up from Foxton Locks.

A sunny morning this time round, and fortunately there seemed to be no boats heading down, so although we were by no means first in the queue for the climb uphill, there was no delay in getting started. 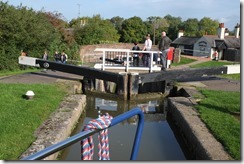 The ten locks, arranged as two five-chamber staircase locks (with a passing place between them) use side pounds to manage and save water. The paddle gears are painted red and white, and the mantra is “Red before White – you’ll be alright; White before Red – you’ll wish you were dead.” Causing the side ponds to flood doesn’t make you popular with the locals.

The sunny Saturday morning had brought out plenty of gongoozlers to get in the way and distract us, but after an hour’s exercise, we reached the welcoming sign at the top. Stopping to admire the view and fill up with water, it was clear the weather was closing in a bit, so we headed off along the summit pound and found some pleasant moorings in the middle of nowhere with a pleasant if dull and cloudy view, and settled down for a lazy afternoon. This part of rural Leicestershire is really very pleasant.