Those sad followers of this Blog will know that the plan was to cross the Pennines – probably by the Rochdale Canal, returning by the Leeds and Liverpool. Crucial to this plan was the ability to pass through the Marple flight of locks, which had been closed for months for repairs. The promised Easter opening date had passed and gone, as had the early May bank holiday date; as part of the popular Cheshire Ring, the hire fleet companies were getting cheesed off. The latest opening date was the second, late May bank holiday, and the lock flight was indeed opened to traffic.

We were still suspicious, but decided we’d take CaRT at their word, and left Westport Lakes to transit Harecastle Tunnel then head up the Macclesfield Canal, which goes up to Marple. We ended up mooring at a favourite spot near Little Moreton Hall, a National Trust of some repute. We’d moored here a couple of years ago: a pleasant spot. This time the weather was exceedingly nice, so we actually walked across the fields to Little Moreton Hall to partake of their excellent café; we’d been around the hall itself some years ago when we were having Song & Dance built. And for the first time this year, we actually saw some House Martins… the swallows had been around (and initially freezing) for a while.

It was so nice we chilled out here for another day; on Sunday we moved on through the Congleton outskirts and tied up in another favourite spot by the Dane Aqueduct, just at the bottom of the flight of twelve Bosley Locks. That afternoon, there was some excitement as between the first and seconds locks there is a tight-ish bend, with a winding hole; for some reason the water level in the pound was exceedingly low, and one or two boats were having an epic time sorting themselves up.

Meanwhile, the Chief Sherpa had made it clear that she wanted to upload herself into The Cloud, so preparations were made for an early start on Monday morning. 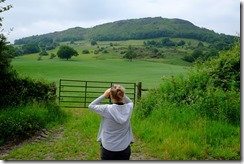 Unlike the modern usage (for the cynics amongst us “The Cloud” is just a different name for “Someone Else’s Computer”), this The Cloud is a hill just over 1000 feet high just alongside the canal, with – apparently – splendid views over the local area. It’s actually quite a tramp across the fields just to Base Camp, then it starts getting seriously steep for canal travellers. 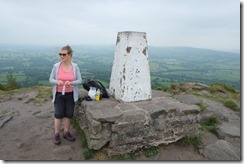 Actually if we had a car we could have driven pretty nearly all the way up. Mutter, mutter. We made it to the top, though, even if the promised views were disappointing: it was warm and muggy and pretty hazy, so the visibility was less than desirable. And not a Hang Glider in sight. 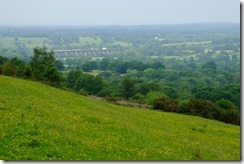 Cutting across the fields coming down rather than staying on the road, we came across this rather splendid modern house with fabulous views in decent weather. We were, however, somewhat bemused by the car parking arrangements (photo taken from same spot as those of the house).

Thoroughly exhausted, we made it back to Base Camp then across the fields to Song & Dance in time for dinner. One of is jolly glad that – by and large – canals do not travel through mountainous terrain.