After a comprehensive pre-cruise inspection, and with the patched cratch cover now in place, the Captain signalled his impatience to get under way, and off we set, wondering what the River Nene would have to offer.

Quickly leaving Northampton behind, the going rapidly becomes rural and river-like, and with all the fine descriptions of how pretty and remote everything seemed to be fine. And – despite being a pleasant Sunday in August – there was little sign of other boaters.

However, although the locks are pretty well maintained by the Environment Agency compared to the CaRT system, they are broad locks, mostly with a small-ish drop, and occur – at least initially – about every mile (i.e. about every 15-20 minutes). This is not only hard work, but makes achieving a leisurely coffee break while cruising somewhat challenging. We suspect the whole setup is more about controlling water flows and avoiding floods in Northampton and Peterborough than it is about making a user-friendly navigation.

Most of the locks are of a design not seen on the canal system: instead of two downstream gates with paddles set in them at the bottom which are raised and lowered to let the water flow (or not), here the gate itself is a giant paddle like a guillotine, raised completely out of the water on chains that one earnestly hopes don’t break! 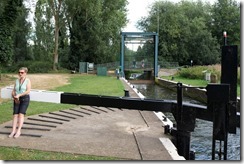 Most of these guillotine gates are electrically operated. When you push the button to raise the gate, it just goes up a tiny bit and stops, while the water in the lock rushes out underneath impressively quickly. The boat goes down in the lock like a fast elevator. You then have to wait for two minutes before holding the button down to raise the gate again – oh so grindingly slowly. The other downside, having raised the gate, is that it then proceeds to drip water all over you as you move under it, although the river water is crystal clear compared to the average canal.

Rumour has it that further down some of these locks are still manually operated by a big hand-wheel that means exercising quite a heave to break the seal, great caution to avoid raising it too far too quickly, and a great deal of puff and time to raise it all the way. We shall see.

Meanwhile, there were other challenges…

Before long we came to a section so weedy, it was more like the Sargasso Sea than a British River. And the lock where the enclosed access bridge was occupied by four adult horses and two foals – one lying down – made crossing the canal to get to the control box an interesting exercise for non horsy people. The thin steel guillotine only just above the lock water level creates an interesting infinity pool effect that distracts you from realising how little is stopping your boat from a plunge over the top…

The Captain, who was so excited to be back on the water again that he jumped ship every time we stopped at a lock was doing his best to slow us down, too. We think he might have been looking for somewhere quiet to do his business rather than use the on-board facilities, but never quite found anywhere suitable before we needed to get going again.

The magazines suggest that perhaps the reason for the River Nene’s apparent unpopularity – despite its remote rural beauty and all the pretty villages you pass en-route – is the number of locks (about 36 in the 60 odd miles between Northampton and Peterborough). There were some hints that “proper” moorings were a little hard to come by, and that one might have to just moor up against the bank somewhere – not a problem for us in principle.

But by late afternoon we’d a different view: mooring somewhere other than at one of the very  few visitor or marina moorings, was absolutely impossible. Since passing Billings Aquadrome with its hoards, fun fair, the remains of the hot-air balloon festival, poor visitor moorings and naff pub, we hadn’t seen a single place we could even realistically tie up for lunch, let alone a suitable spot for an overnight stay.

Lunch was eventually taken on the hoof, as it were, about 14:30, and with all this, a decidedly Sunday Morning Coming Down mood seemed to settle on proceedings. It was quite clear that our normal canal habit of just cruising until we’d had enough then look for somewhere amenable for the Captain and crew wasn’t going to work here! Meanwhile, as we continued downstream, the river banks were unremittingly overgrown – even if the water was deep enough you couldn’t get anywhere near enough to leap ashore and tie up. So even if you fancied visiting one of the much vaunted nice villages described in the book, you were stuck.

Beginning to get somewhat concerned and  tired, and wondering if we’d have to keep going until dark then tie up on a lock landing until the morning (bad manners, apart from being strictly verboten) , we finally noticed on the map a place near Doddington Lock labelled “Unofficial Mooring”. We’d passed one of these before: a nice enough field, and the water might have been deep enough, but the high bank, 6 foot high man-eating reeds, nettles and Himalayan Balsam were a challenge too far. And if this  one was useable, we were probably too late…

As it happened, it was empty and perfect, even if we did have to get the gang plank out (and by now felt like making Biggles walk the plank the other side).

We are obviously going to have to do some more research about suitable mooring places for a 58ft narrowboat before setting off again: don’t want days like that very often, thanks!

Even the Captain seemed to be regretting his decision not to sign off the crew’s earlier purchase request for a scythe, a strimmer, a pair of shears and flamethrower…