8 o’clock the lockkeeper said, for our transit up a tidal bit of the River Great Ouse and through Denver Sluice onto the non-tidal section. So although we appeared to be number three in the queue, we were up at OMG o’clock and ready for duty at 07:45. No sign of the lockkeeper, though. 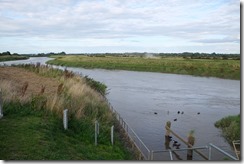 At 8 o’clock an old hand at this tidal transit lark peered over the wall, and said that the tidal river was still very high, too high to get under the sluice guillotine and bridges, and reckoned it would be nearer 08:45 before anyone could venture through.

Sure enough, about 20 minutes later Paul the lockkeeper appeared, and started marshalling everyone together: there were four of us going up, and some coming down from Denver. As a newbie, Paul suggested that yours truly help him lock number one through as a training exercise, with running commentary and plenty of hints on handling the boat on the river while the tide was flowing out pretty fast. Helpful and most welcome.

The lock has to cope with the river being higher and lower than the Middle Levels, so it has two sets of gates at the end of the chamber, one set pointing up and one set pointing downstream. Locking up, the chamber is barely 58ft long: a tight squeeze for us. At certain times, when the Great Ouse and Well Creek are the same level, they can open everything and just let everyone sail straight through (for a short time)!

In the end, it all happened very quickly. Exiting Salter’s Lode lock we managed – without too much drama – the nearly 180° turn into the river doing its best to take us sideways to King’s Lynn, poured on the power, and barely 5 minutes / a few hundred yards later we branched off the fast flowing tide into the cavernous safe haven of the Denver Sluice lock, which was already open waiting for us. No time for cameras! 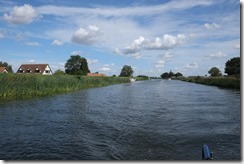 With all the excitement over, the journey down to Ely was utterly undramatic. Nice weather, big wide river, high banks, long straight stretches and little to see, although we were encouraged to spot a number of suitably pleasant mooring spaces for possible use on the way back. The village next to the 10 mile bank appeared to be called 10 Mile Bank. Can’t think why. 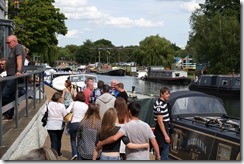 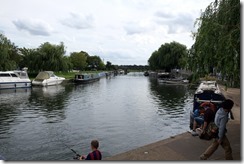 Ely is seemingly a waterways honey-pot, so turning up on a sunny bank holiday Saturday lunchtime was probably ill advised, but our grasp of days of the week and the calendar has become rather vague…

Ely waterside gardens and town quay were mobbed, with boats and people, but our luck held, and we eventually located somewhere just under the railway bridge in the picture, with rather more suitable facilities for the Captain. Cheesy chips and decent Guinness at the quayside pub for a slightly late lunch – all was well with the world.